It’s 21:34. You’ve been sitting in room 216 for the past 4 hours, waiting patiently. Hunting is all about tactics, you say. Being in the right place at the right time. While falling deep into the realm of your fantasies, you look at your hands. They’ve served me well. You press your fingers against your palm, slowly counting. 1… 2… 3… you whisper. It’s going… to be… my 6th…

To celebrate Mindhunter Season 2 release, we’re continuing our journey of controversial acting roles, leaping straight into the heavy stuff — serial killers. We posted a poll on our Facebook Page, asking the following: 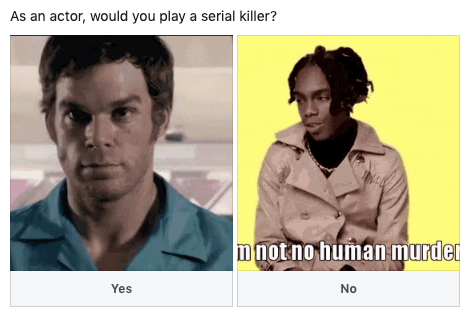 The poll will continue for 6 more days, but so far it looks like the allcasting community would love to play serial killers — 90% voted yes!

Have you seen the Mindhunter TV series? If the answer is no, you’re missing big time.

The first episode aired on October 13th, 2017 and since then has taken the heart of every binge-watcher out there. With the IMDb rating of 8.6, Mindhunter has become one of the best TV series of the last 2 years.

The long-awaited Mindhunter Season 2 was released just a few days ago — on August 16th. Often new seasons come with disappointment. However, Season 2 brings creepy-flavored treats to any mindf#ck-loving weirdo out there.

Spoiler alert! If you continue reading this article, you’ll find out what kind of serial killers are shown in Mindhunter TV series.

More than celebrating great films and TV shows, we celebrate great actors. In Mindhunter several actors took up the terrifying challenge of playing a serial killer. Can you imagine it? Tapping into the mind of a psychopath. Not just understanding how you go about killing a human being, but how you see it as a vocation. What do you think? Could YOU pull this off?

Don’t let that lovely smile trick you. Cameron Britton didn’t just take creepy to a whole new level. He managed to trigger panic attacks not only in the TV series but also in real-life, for anyone who was watching him…

Damon Harriman played Charles Manson both in Mindhunter and the scandalous new film “Once Upon a Time in Hollywood”.

Who was your favorite actor on Mindhunter?

This is the spot that I created Thursday in San Diego I shot it on my iPhone 8+ and edit it down on finalcutt … Enjoy !
Best Serial Killer Actor Contest on allcasting.com
Show the world your acting range!
That’s not where this psycho-celebration ends. Since many of you said you’d play a serial killer, let’s see! We’re announcing a contest — and 5 winners will get allcasting premium for a whole year! Send a 15-30 second long video to stories@allcasting.com of how YOU would play a serial killer. Due date: August 31 midnight. Winners will be announced on September 3rd on our Facebook page!
The contest is applicable to US residents only. Applicants must be 18+ years old. This contest is not affiliated with Facebook, Mindhunter or Netflix. .

Actor Will Roberts – Host of ActingUpRadio.com

This episode of ActingUpRadio.com I talked with standup comedian, writer, actor and man that wears many hats, but does NOT know his size… Daniel Eachus! I originally saw Daniel at a stand up club at a huge casino in the town of Temecula, California < an Oxymoron…  I knew right off the bat by watching him he was a lot bigger than the space he was playing in. He, and I am sure he hears this a lot, was by far the best comedian of the whole night, of course he was the ONLY comedian (rim shot) .. no he was not alone that night performing, but he was the headliner, and rightfully so. He smooth delivery and casualness ( not to be confused with the new style comedy called – I DON’T CARE WHAT YOU THINK, COMEDY) was NATURAL, at ease and funny, and I rarely give that compliment to anyone …other than myself ;).  sit back and listen to a fun show!

Daniel Eachus is a rising young star in the comedy world. Even at such a young age, Eachus has the chops of a comedy veteran and people are taking notice. Born and raised in Fresno, CA, he was surrounded by farms, but didn’t want to smell raisins for the rest of his life, so he turned to comedy to get him out. For college, Daniel’s wish came true and he left Fresno to study in Long Beach. By day, he was a student, by night he performed on the stand-up comedy circuit. After just one year of nightly performances, he became the youngest finalist ever in the “Funniest Comic in Los Angeles” contest held at the Jon Lovitz Comedy Club. He’s been entertaining audiences ever since.

Eachus has been performing stand-up and improv throughout the nation’s clubs and recently was featured on Comedy Central’s “Up Next” and Sirius XM’s Comedy Central Radio. A finalist or winner in scores of comedy competitions including the World Series of Comedy, Up Next Regionals, Sacramento Comedy Festival (1st place winner), OC Improv Cup and more, he’s considering expanding his trophy shelf.

But doing stand-up and improv is not enough for Daniel. When he’s not onstage making people laugh, he’s making people laugh at their screens. Daniel acts, writes, and produces the comedy sketch series, “Bigfoot Chasers”. He is a co-writer on a brand new Kevin Hart-Produced Series. He’s starred in 10 National Television Commercials, was featured on SpikeTV, and recently made his stand-up television debut on Fox’s “Laughs”.